Our spirit is not represented by individual pilots, particular airplanes or specific routines. Instead, we are always looking up, searching the skies for life's next adventure. 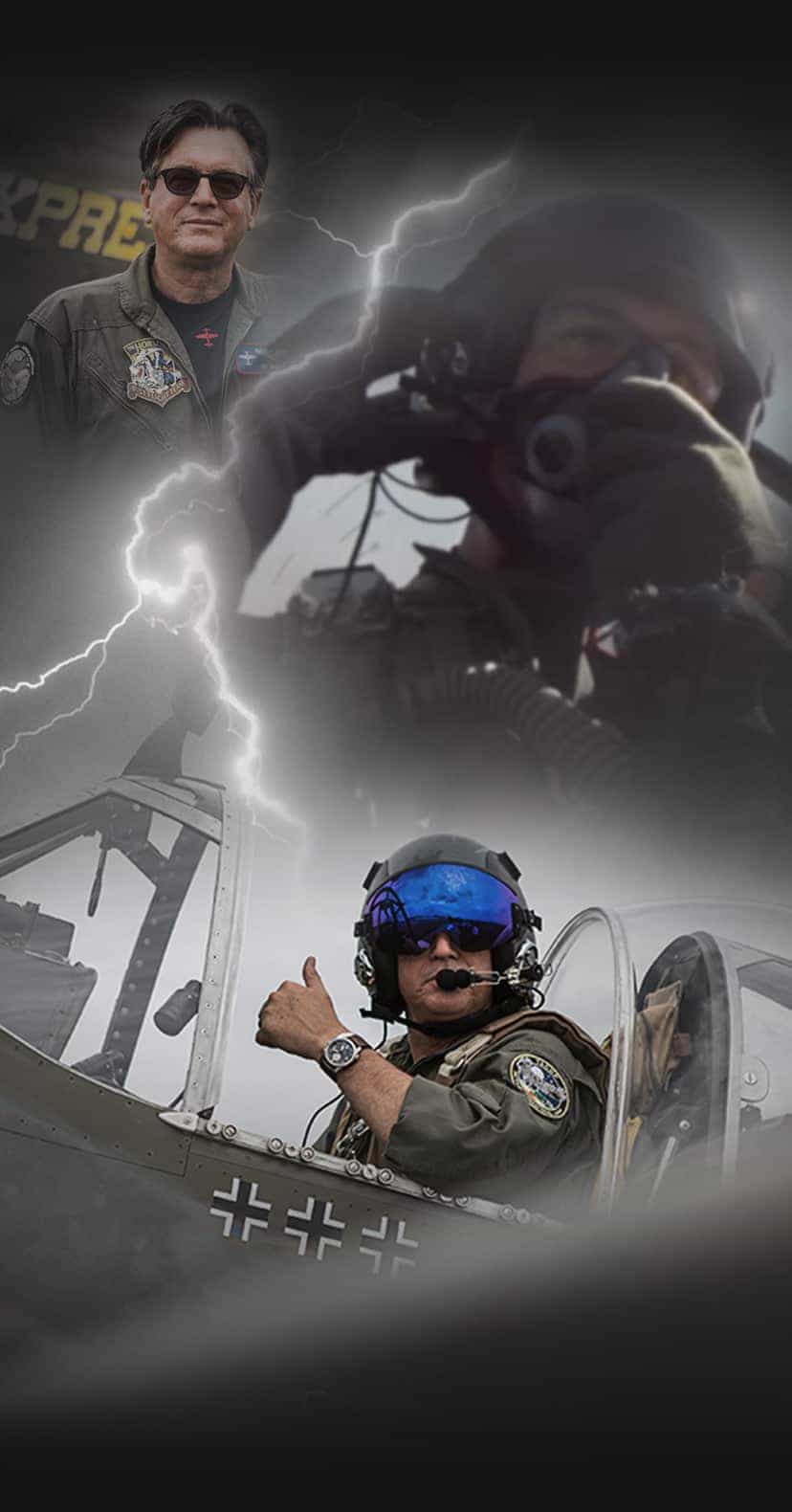 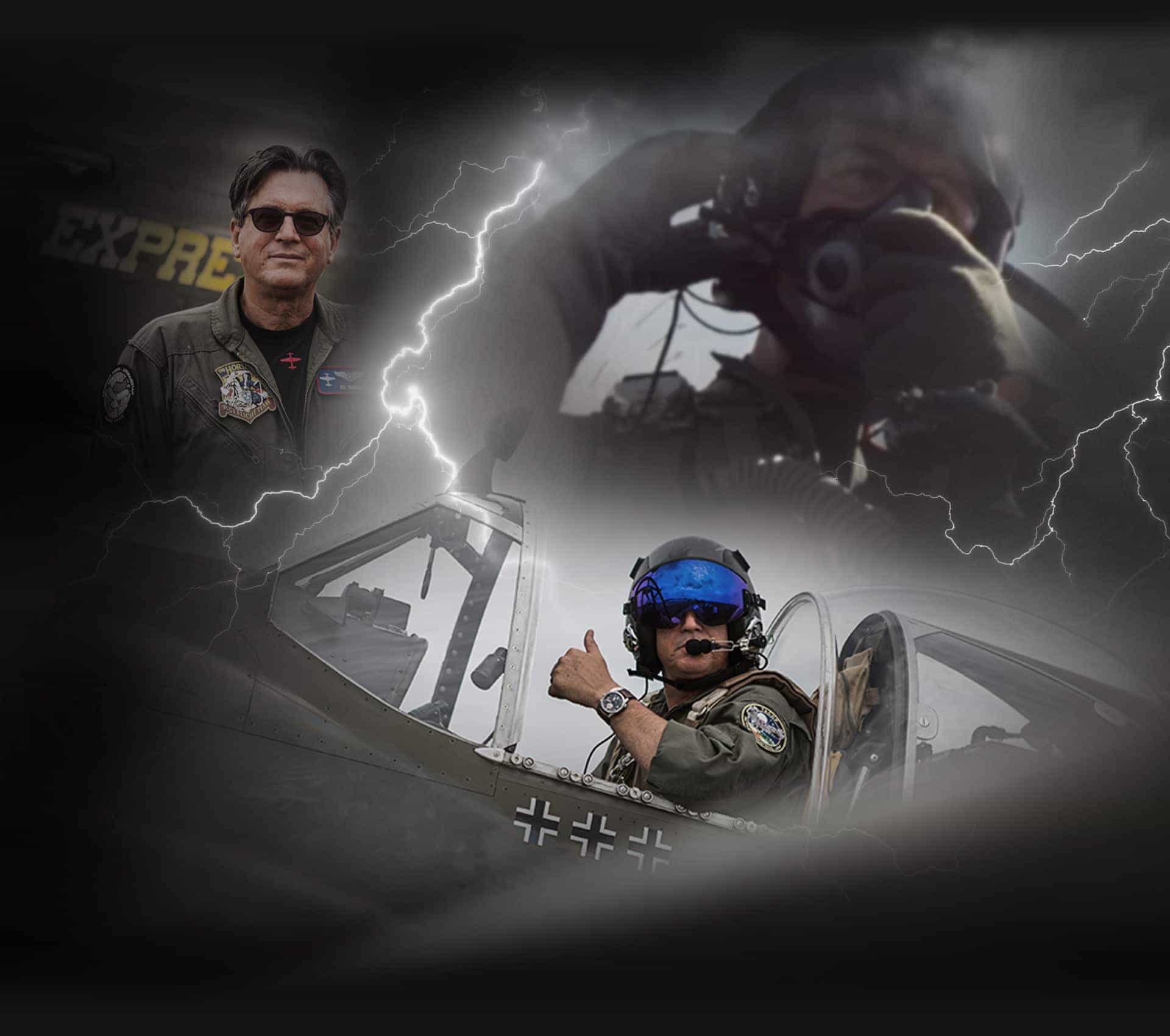 Ed Shipley's air show career began with the Six of Diamond T-6 formation aerobatic team, where he flew right wing and lead. He is a founding member of The Horsemen Flight Team.

Ed was a 747 pilot for Atlas Air and has flown air shows for over 20 years in the T-6, P-51, F4U, F8F, and F-86. He has piloted a Mustang across the Atlantic and flown a F4U Corsair off of a nuclear aircraft carrier. Ed was a board member of the International Council of Air Shows and currently is an ICAS Ace evaluator for warbirds and jets.

He also flew as a Spitfire pilot in Christopher Nolan's acclaimed 2017 film Dunkirk, which tells the dramatic story of one of WWII's most important battles. 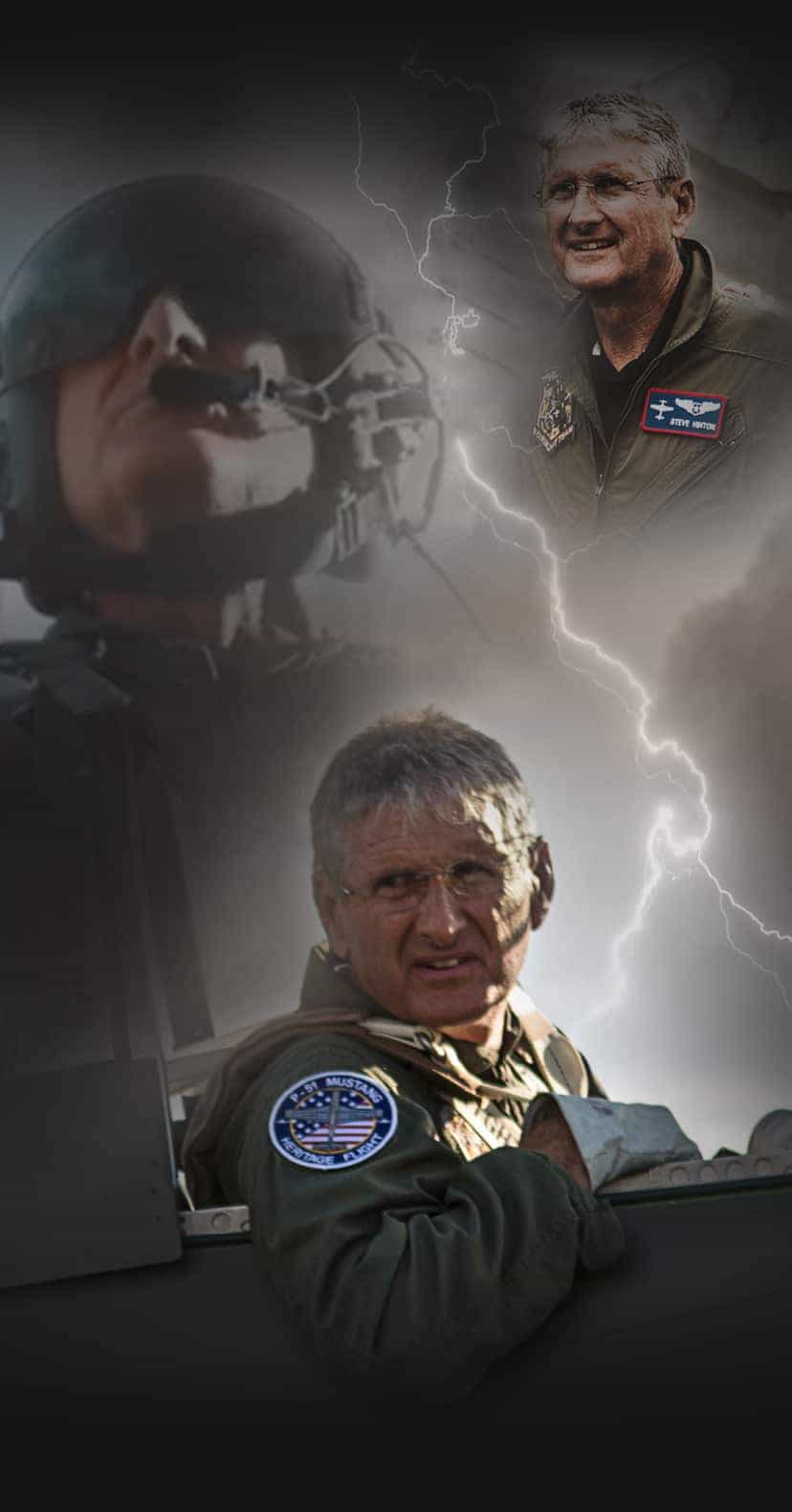 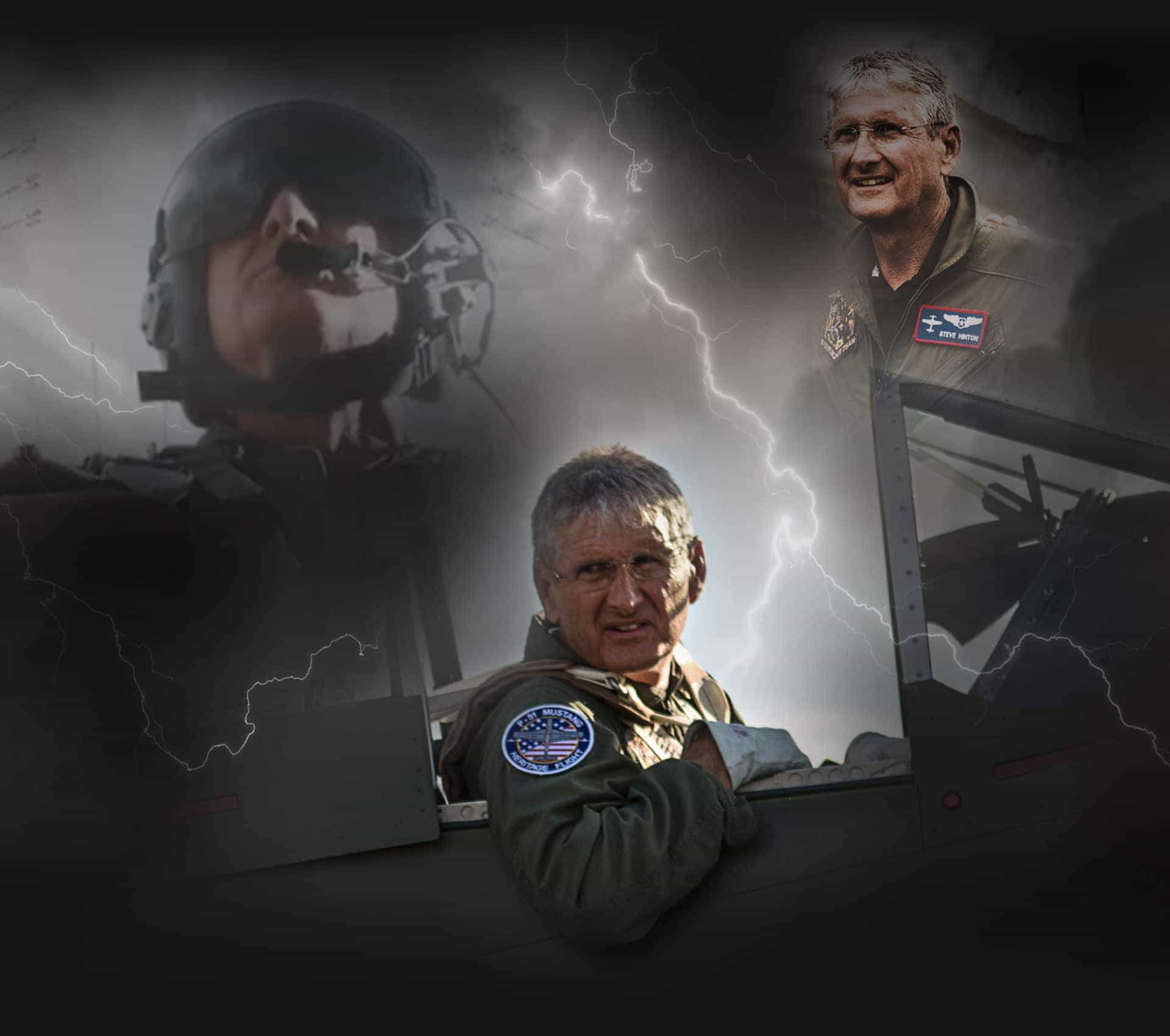 Steve Hinton is a fixture in the world of warbirds, performing at air shows around the world for more than 35 years, flying over 150 types of aircraft. His restoration company Fighter Rebuilders LLC, has restored more than 40 warbirds to pristine flying condition.

Steve has been President of Planes of Fame Air Museum since 1994. He was a founding member of the Motion Picture Pilots Association and is a civilian pilot with the Air Force Heritage Flight Foundation, a World Speed Record holder and a Reno Air Race Champion. He has more than 7000 hours flying WWII fighters. Steve was inducted in to the EAA Warbird Hall of Fame in 2005 and received the Art Sholl Showmanship Award from the International Council of Air Shows (ICAS) in 2010.

Steve also flew as a Spitfire pilot in Christopher Nolan's acclaimed 2017 film Dunkirk, which tells the dramatic story of one of WWII's most important battles. 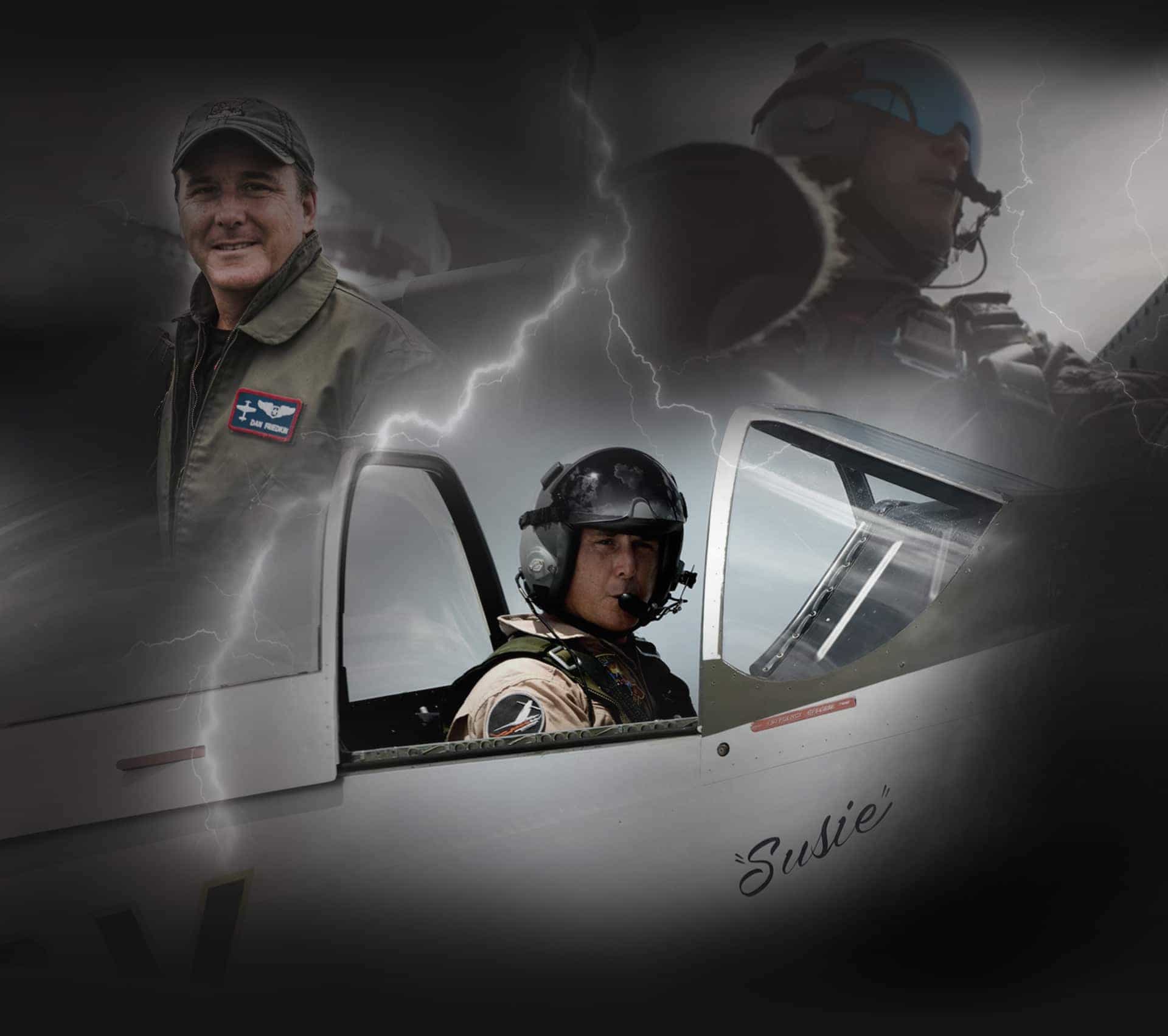 Dan Friedkin is the founder of Pursuit Aviation and chairman and CEO of The Friedkin Group, a privately held and diverse consortium of businesses and investments in the entertainment, automotive, hospitality, golf and adventure industries that includes Pursuit Aviation.

Aviation has been a passion of Dan’s since an early age, when he first took to the skies developing his skills on gliders and a variety of tail wheel aircraft and helicopters. Today, Dan has a focus and passion for warbirds and actively flies the T‐6, P‐51 Mustang, F‐86 Sabre, F6F, F8F, F4U‐4, Hawker Hurricane and various models of the Spitfire. Dan uses his unparalleled experience and enthusiasm for flight in the film industry; over the past five years he has directed and coordinated more than 1,000 hours of helicopter air‐to‐air, ground‐to‐air and in‐cockpit footage with Spitfires, Mustangs, Sabres, Corsairs, Lightnings, Hellcats and Bearcats.

Most recently Dan acted as an aerial unit coordinator, lead spitfire pilot and helicopter camera pilot in Christopher Nolan’s epic IMAX film, “Dunkirk.” The stunt team won the Best Specialty Stunt award at the 2018 Taurus World Stunt Awards.  His work on “The Horsemen Cometh” was nominated for an Emmy in cinematography, and he has served as director/DP, aerial coordinator and principal pilot for numerous feature films, documentaries and commercial projects.

WE FLY BECAUSE IT'S OUR GETAWAY. WE FLY TO HONOR THE HISTORIC AIRCRAFT WE ARE PRIVILEGED TO RIDE.